Home   /    The Grand STEM Challenge Camp was a huge success! 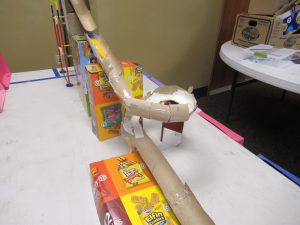 SAY San Diego was thrilled to receive a grant from Northrop Grumman to host the second annual Grand STEM Challenge Camp, in partnership with Sylvan Learning of La Mesa.  The STEM Camp – focused on Science, Technology, Engineering and Math — was held at the Jacobs Center for Neighborhood Innovation for two weeks, July 10-14 and July 17-21. The focus of this year’s STEM Camp was to engage groups that are underrepresented in STEM education and careers throughout every aspect of the program.

The Grand STEM Challenge Camp uses a project-based learning approach in which students are taught engineering skills through examining a problem which needs to be solved. The week-long camp was set up so that on days 1-2, students were taught the engineering process through “mini-design challenges.” On day 3, a main challenge was introduced: “Build a machine out of K’NEX and other materials that can move a ping pong ball from a six-inch space at one end of a table to a six-inch space at the other end of the table. The ball cannot be touched, must be started with an outside force and cannot fall off the table or bounce back.” Students spent days 3-4 designing, testing and redesigning their machines. Day 5 was the final build and competition day. Participants included 60 students entering grades 3-8. Week one included a group of African American youth from The Links to STEM program and an all girls’ group formed with the support of BeWise (Better Education for Women in Science and Engineering). Week two included 7th and 8th graders from O’Farrell Charter Middle School linked to SAY San Diego’s program there, as well as participants were selected by Sylvan from students whose families previously worked with Sylvan through the San Diego Unified School District’s Supplemental Education Services (SES) and students from the Jacobs Center’s programs.

Each week concluded with participants making presentations to demonstrate their knowledge of force, momentum, gravity and Newton’s Law of Motion, budgeting through project demonstrations to local judges. SAY’s vice president of child and youth development, Chris Jewell, and board member, Janie Wardlow, joined the panel of judges. Winners received a K’NEX kit, a medal and the opportunity to compete in the National Grand STEM Challenge.  Among the winning machines were a Zip-line-like machine that moved the ball, encased in a basket, down a string to the end zone. Another was a track which successfully used gravity and kinetic energy to transport the ball. Awards were also given for several categories such as creativity and teamwork. Based on pre and posttests students gained an average of 25% growth of knowledge in the areas of physical science and math and 45% growth in their interest in STEM related careers, after just one week.

In recruiting participants, we learned of Ebelin who came to the U.S. from Guatemala only a month before The Grand STEM Challenge. Initially, she was hesitant to join our camp because she didn’t speak English and had no knowledge of STEM. Yet, once she was placed in a group with three girls and a Spanish speaking volunteer, Ebelin never stopped smiling. She slowly began to open up, asking her volunteer to help her translate. She also revealed she had just met her mother because she had been left in Guatemala with her grandmother as an infant. She expressed she was having trouble adjusting to her new siblings and longed to be back in Guatemala with her grandmother. As the camp progressed, Ebelin was visibly more social and confident. She made friends, as her group found ways to communicate. They taught her words in English, and in return she taught them words in Spanish. By day 4, they were a team and friends on all social media platforms.  The girls in her group were heard saying, “I wish you could go to my school next year so we can help each other.” The presentation on the final day of the competition, required all team members to speak. During Ebelin’s part, she presented in Spanish and, immediately, one of her teammates translated for her. Their team was awarded for their amazing teamwork and collaboration. By week’s end, Ebelin summed up her experience with a smile we all grew to love, “I’m very glad I joined.  Now, I have friends in America!” Seeing her develop social confidence and connections while acquiring knowledge about engineering was very rewarding.

Parents all over San Diego County look to San Diego Quality Preschool Initiative to find quality early care and education programs. Make sure your program is included in their search by signing up today. sdqpi.org #SDQPI ... See MoreSee Less