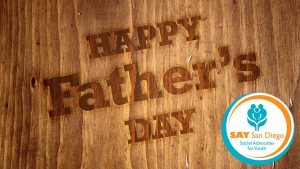 Father’s Day dates back to the middle ages when on March 19 it was celebrated as the feast day of Saint Joseph. It is celebrated worldwide on various dates but in Latin America was adopted from the March date celebrated by the founding Spanish and Portuguese explorers. However, it was not celebrated in the United States until the 20th Century.

In the US, Father’s Day, which we will be celebrating this Sunday, originally evolved as a memorial. Back in 1907, Grace Clayton proposed a day in remembrance of 360 men lost in a mine explosion in Fairmont, West Virginia, which left many children fatherless. In 1909, a year after Mother’s Day became officially accepted, Sonora Smart Dodd of Spokane, Washington, was listening to a Mother’s Day sermon at her church. She admired her father for raising his six children alone so she decided she wanted to honor her father and all others in a similar way. She promoted her idea to local clergymen who agreed that a day would be chosen to honor all fathers and on June 19, 1910, sermons honoring fathers were presented throughout the city.

Although the event lost momentum for a decade, in the 1930s, Dodd re-promoted the celebration, with other cities across the country copying this event. Merchants encouraged the commercial aspect of the holiday, introducing a bill in Congress in 1913 to recognize Father’s Day. However, Congress resisted due to a concern for the risk of excessive commercialism. In 1924, President Coolidge recommended that the day be observed throughout the entire nation but Congress defeated several attempts to formally recognize the holiday.  In 1966, President Johnson issued the first presidential proclamation honoring fathers and designated the third Sunday in June as Father’s Day. The day became a permanent national holiday when it was signed into law by President Nixon in 1972, formally recognizing the role that fathers have played in our lives.

It is fitting that we consider the role of remembrance this coming Father’s Day, as we think of our military fathers and mothers. For many in San Diego, military service has meant that our fathers and mothers have had to play a very different role on days such as this. Many fathers have made the ultimate sacrifice or cannot come home to be with their families, leaving their children to watch other families in celebration. However, we can commemorate the day in an appreciation of the person we love, having fun, positive experiences that we can record, share or send out our joy to the universe.

For some, Father’s Day may hold painful memories – just as the origins of the day held. Not everyone has a father in their lives or happy memories of the person who was their father. Think of the child who does not have a father to give the school Father’s Day project to. What if your father is estranged, lives far away, you never knew him, or has died? Spending time and energy in positive thoughts promotes forgiveness and healing, whereas holding in negativity and resentment is stressful and destructive at a cellular level. Finding a way to create a positive day this coming Sunday may be the best way to promote healing and joy in our lives and for those around us. Most of us can think of someone who has played a fatherly role in our lives, giving of himself, offering advice and support when we needed it most. Perhaps this surrogate father can provide the focus for our thanks giving.

Here are some ways to mark the day in memory of the fathers in our lives:

SAY San Diego believes in the development of self-sufficiency, strengthening families, and parenting support. So it is fitting that SAY San Diego celebrates the many victories of their fathers, who have come to rely on their positive and enduring support, by wishing all fathers a “Happy Father’s Day!”

Parents all over San Diego County look to San Diego Quality Preschool Initiative to find quality early care and education programs. Make sure your program is included in their search by signing up today. sdqpi.org #SDQPI ... See MoreSee Less