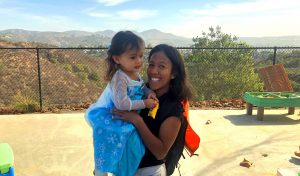 Imagine leaving behind a successful career and a loving family to move 7,000 miles away. The language is new, the culture is vastly different, and the only person you know is your spouse. For Maureen, a military wife born and raised in the Philippines, this is her reality.

For many military spouses, feelings of loneliness and isolation are common, but as someone brand new to the United States, Maureen had to overcome additional challenges. “At home in the Philippines, I was very independent. I provided for my family and looked out for everyone else. Here in the United States, I’ve had to learn to accept help from others.” A critical source of help and support is SAY San Diego’s Healthy Start Military Family Resource Center (MFRC) and First 5 First Steps program.

Maureen learned about SAY’s programs through the Balboa Naval Medical Center when she was pregnant with her daughter, Amelia. She was connected to her case manager Debbie, who became an immediate source of support and guidance. “For the first two years, Debbie visited me at my home every week. She was my only confidant. She checked on Amelia’s development, provided me with resources, and helped me to get to know the area and what was available to me.”

These days you can find Maureen at the MFRC every week. She brings Amelia to playgroup so she can interact with other children, and Maureen participates in yoga classes taught at the center by volunteers. For Maureen, the MFRC is a safe space where she is supported by SAY staff and a community of military wives who she can lean on.

Appreciation for our military extends beyond those in uniform. Military spouses also make sacrifices in service to our country, often parenting children solo and managing frequent moves that keep them far from familiar support networks.

SAY San Diego is proud to support military families through a variety of services and a place to connect with others. The MFRC serves active duty, transitioning, and veteran military personnel and the families. Located in Murphy Canyon, which has one of the largest collections of off-base US military population in the world, the MFRC strengthens families and communities by offering connections to resources such as food, housing, counseling, financial assistance, parenting classes, support groups, and more.

SAY San Diego provides parents and children with this loving support, starting with early home visiting, infant care and preschool, and continuing with school-age educational enrichment serving thousands of children and families every day. We believe, across our comprehensive array of programming, that it is vital to be based in the local schools, neighborhoods, familiar and accessible community locations, and places where children, families and our neighbors live out their daily lives. We strive to open every possible door to opportunity, equity and well-being. In recent years, we set an example of how employers and workplaces can do more – by opening a model early childhood center for our employees and the community members. Click the video below to hear what this has meant to Ashlee, a SAY employee whose child is in the center, and Chantal, a community member who enrolled her child in the center after a difficult search for the right fit.youtu.be/jR1CEZgBhMg ... See MoreSee Less