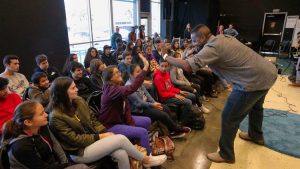 One year ago, the stories of 13 young refugees from around the world played out on the stage of downtown’s Horton Grand Theatre via dance, spoken word, song and other original creative works.

In the time since Intrepid Theatre premiered “Exiled Voices: The Refugee Art Project,” a number of those works’ subjects — who were all Crawford High School students at the time — have graduated or moved away from San Diego.

But their struggles and triumphs continue to reverberate — this time on a whole new series of stages.

In partnership with the youth social-services nonprofit SAY San Diego, Intrepid has launched a school tour of “Exiled Voices,” with hopes of bringing a condensed version of the project to as many as 20 campuses around the region this year.