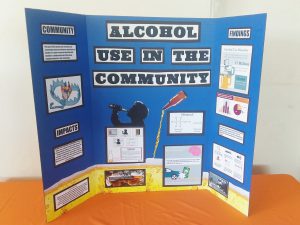 Student projects took center stage at a Town Hall meeting at Clairemont High, focusing on how different substances affect the person using them and the community at large. “From Sugar to Heroin – Substance Use in Our Community” was a fall semester project at the school’s Academy of Health and Medical Sciences. The students’ findings were expressed with graphics displayed at the January 11th Town Hall.

The Town Hall also featured a panel discussion about substance abuse. Panelists included law enforcement, a prosecutor, and treatment professionals. SAY San Diego’s William Perno talked with students about synthetic drugs like bath salts, spice, and fentanyl. He was also featured in a KPBS News story about the event.

Students from Kearny High’s School of Digital Media & Design worked with the Clairemont students to produce the displays and graphics used at the Town Hall.