From CBS8.com
By Richard Allyn, Reporter 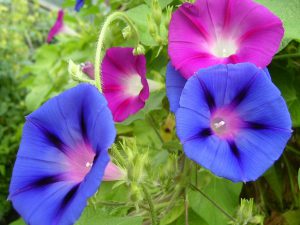 SAN DIEGO (NEWS 8) – It’s a growing problem throughout parts of the nation – teens turning to common plant seeds as a type of party drug to score a cheap but risky high.

Authorities throughout the country and even Canada are warning that teens are using easily accessible plant seeds, including Blue Morning Glory, Hawaiian Baby Woodrose, Yellow Jasmine, Foxwood, Oleander and others, to get an inexpensive high – but one that could be costly to the user’s health. Teens are ingesting the seeds by either swallowing them whole or crushing them to produce a tea…

“What parents need to know is that the landscape has completely changed from when they were teens themselves. What I would say to parents is to have that conversation with your child,” said Perno.

“Death does not discriminate. Death does not care what age you are, what gender, what race. You make that wrong choice – it can be fatal,” he said. 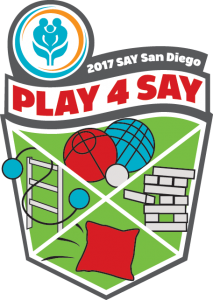 “Get in the Game” for Kids and Families!

On Thursday, July 27, from 5–7:30 p.m., Play 4 SAY will bring business professionals and community leaders together for an evening of grown-up, lawn game fun at Liberty Station’s Ingram Plaza, emceed by media sponsor 10 News. Approximately 70 teams of three people will compete in rounds of popular lawn games including bocce ball, cornhole, and ladder golf provided by game sponsor Tosso.com. The evening will end with finalists vying for first place through a friendly giant tumble tower playoff. Players and non-playing guests alike are invited to enjoy an array of tasty refreshments, compliments of local restaurants and vendors. More than 20 auction packages offer even more ways to win.

END_OF_DOCUMENT_TOKEN_TO_BE_REPLACED

Thanks to KUSI TV, SAY San Diego Elevated gave thousands of San Diego parents a nudge to talk to their kids about alcohol.

“When we shout and we slam our doors and blast loud music it sounds like we don’t listen, but we do,” student Emily Corrow told KUSI’S Lisa Remillard. “Parents are a big influence on our lives.”

“Three out of four teens do listen to their parents when it comes to talking about alcohol,” explained fellow teen Natalie English. “For my parents, it was really important that I knew the consequences and what could happen in my life if I didn’t listen to them.”

Corrow and English are members of SAY San Diego Elevated at Serra High School. They appeared on KUSI’s “Good Morning San Diego” along with Cristi Walker from Mothers Against Drunk Driving (MADD).  The interview on April 21 was the culmination of MADD San Diego’s Powertalk 21 campaign.

END_OF_DOCUMENT_TOKEN_TO_BE_REPLACED

Thank you to the San Diego Foundation for choosing SAY San Diego as one of its Opening the Outdoors Program grantees! This year, 31 nonprofits, including SAY San Diego, will collaborate to leave a lasting impact in the region by:

“SAY San Diego will provide unique experiences for underserved youth in central and southeast San Diego by connecting the environment with the arts. Students will become outdoor advocates and learn how to use photography to document and raise awareness about the importance of topics, such as conservation and environmental justice. The project will culminate in a community-wide exhibition where 100 students will present their visual findings to local leaders and promote civic engagement of environmental challenges.”

Read the Complete Article on The San Diego Foundation website 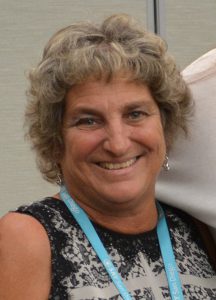 We are very pleased to announce that Christine Jewell has been selected as the new Vice President for the Child and Youth Development Unit at SAY San Diego. Chris will step up in May as her long-time colleague, supervisor, and mentor, Sandy Johnson, retires at the end of April. Chris has most recently served as Senior Director for Child and Youth Development with a dedicated and exemplary track record of 30 years with the unit. She began her career with SAY in 1987 following her service as a Physical Education and Health Education Teacher. Congratulations Chris!

The impact of addiction is the subject of two plays that will be performed by San Diego State University theatre students Thursday through Sunday.

One of the plays, “Finding Our Way,” was written by inmates at Richard J. Donovan Correctional Facility. The inmates are in the Out of the Yard program, which is facilitated by the Playwrights Project.

The play is a series of reflections along the path of addiction.

The second play, “Other People’s Kids,” is about four youth who try meth.

The executive director of the Playwrights Project, Cecelia Kouma, joined Midday Edition on Tuesday to discuss how the plays came to fruition.

From the San Diego Union-Tribune
By James Hebert 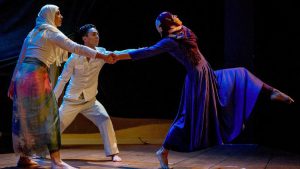 The words that rang out over a brooding blues-guitar riff at the Horton Grand Theatre on Sunday told a story of both struggle and resilience: “She ain’t seen peace for a while, but you can still see the sun in her smile.”

Those lyrics were from “Justine’s Peace,” a “spoken soul” piece by Kendrick Dial that was among 11 creative works unveiled at a free public showcase for Intrepid Theatre’s new program “Exiled Voices: The Refugee Art Experience.”

Struggle and resilience were common components in the real-life stories of the 13 students whose experiences were interpreted into art for the program, a partnership between Intrepid and SAY San Diego Crawford Community Connection.

The Crawford High students are all refugees; many of them had spent most of their lives in refugee camps before coming to San Diego, and some have been here only a matter of months.

From TimesofSanDiego.com
By Nancy Gannon Hornberger

For decades, San Diego County has been at the epicenter of a pervasive domestic methamphetamine industry. Although no longer regarded as the “meth capital of the United States,” San Diego remains on the front line of the meth epidemic.

Knowing people who have suffered from meth addiction and death is part of my personal and professional experience. I have friends and colleagues who have lost loved ones — including teenagers — to meth, or have lost children, spouses, and friends to the justice system because of the ravages of meth addiction.

At SAY (Social Advocates for Youth) San Diego, we hold a vision of opportunity, equity, and well-being for all San Diegans. Our team takes a public-health-focused approach to raising awareness, increasing prevention, and reducing misuse and abuse of alcohol, tobacco, and drugs, through community collaboration and empowerment.

SAY San Diego’s commitment to collaboration inspires “Do Something About Meth,” our creative partnership with the U.S. Attorney for the Southern District of California and the Playwrights Project. Together, we’ve commissioned, developed and produced “Other People’s Kids,” a play written by Mabelle Reynoso. “Other People’s Kids” tells the true stories of San Diegans caught up in the inter-generational web of meth addiction. With candor and empathy, the play examines the painful struggles of addiction while offering a message of hope.

Do you watch those ripped-from-the-headlines TV dramas? “Breaking Bad” told the story of a big-time methamphetamine cooker and how his life was corrupted by his actions. Realistically, though, not too many of us can relate to the car chases, shootouts, and explosions that made “Breaking Bad” a success.

“Other People’s Kids,” however, tells stories that hit closer to home because it’s about how meth impacts real people and families. Mabelle Reynoso of the Playwrights Project developed the play based on stories of real San Diegans whose lives were touched by methamphetamine.

END_OF_DOCUMENT_TOKEN_TO_BE_REPLACED

From the San Diego Union-Tribune
By James Hebert

When Divine Ngabire thinks back on her first impressions of the United States, one image in particular seems to stick with her:

“The beautiful lights,” she says, recalling that moment three years ago when she arrived as a refugee from Mozambique. “I came here at nighttime, and we passed through downtown, and it was so beautiful.”

In her time at Crawford High in San Diego’s City Heights neighborhood, Divine has cast more than a little illumination of her own. The senior serves as a translator for other students on campus, sings at campus events (“We Are the World” is a favorite) and is starting a new-arrivals club with some friends to help other refugees get settled in.

“That’s her nature — she helps out,” says Kathryn Cloward, a San Diego singer-songwriter who has come to know Divine well over the past month or so.

“She’s an amazing human being. But we wouldn’t know this if we didn’t get to hear her story.”

And telling that story — or singing it, actually — is just what Cloward plans to do. The musician is one of 12 San Diego artist-mentors who are partnering with Crawford students in Intrepid Theatre Co.’s innovative new project “Exiled Voices: The Refugee Art Experience.”

The idea behind the one-of-a-kind initiative, launched with SAY San Diego Crawford Community Connection, is for the artists — painters, poets, choreographers, actors and more — to first soak in all they can about the refugees and their journeys, literal and otherwise.